Book Your One-on-One Consultation with SGI.

Advertising Insights: The Tug of War Between Reach & Frequency

Reach and Frequency are the yin and yang making media work. Reach measures how many people see or hear you. Frequency is how often your message connects.
Here are some pointers on how you can maximize reach and frequency. But first here’s a prep course on radio versus television:

1.) Radio is the most cost-effective means of advertising, provided the signal pattern of the station matches your service area. So much media has become splintered by the internet, radio has actually benefited and is the single most consumed media around. Over 90% of Americans still use still radio the way they always have…the constant companion in the car going from point A to point B. Radio is also the most powerful frequency medium available to you (more on that later).

2.) Television delivers the highest reach of any media (consider the Super Bowl to be the apex of this). But unpredictable viewer habits make it difficult to reach the same viewer a second or third time within seven nights. Your message needs repetition, so television is trickier to schedule than radio. Stick to shows that viewers prefer in real-time (as opposed to shows you record with your DVR and watch later). News programming and live-action, reality programming satisfies this (think Survivor or The Voice). Morning news in particular is like radio with pictures, and daytime programming is usually consumed in real time (and while your customers are dealing with their problems during business hours). 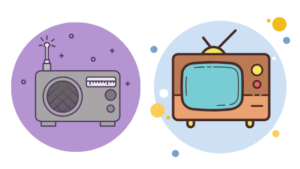 The biggest mistake contractors make is going for too much reach. You don’t want to attempt to reach more people than your budget will allow. Most business owners spread their ad budgets across a wide variety of opportunities because they “don’t want to leave anyone out.” But the result of this strategy is that they reach too many people with too little frequency.
Consider this: would you rather reach 100 percent of people and convince them 10 percent of the way, or 10 percent of people and convince them 100 percent of the way?
Frequency is the secret sauce, so often underrated. We’ve never seen an advertiser fail because they were reaching the wrong people. We have, however, seen hundreds fail because they focused too much on reach (ears and eyeballs) and not enough on frequency (the repetition needed for the same audience to hear or see the message).
We are looking to reach the same listeners and viewers over and over and over, day-after-day, week-after-week, year-after-year. Ideally, we want our message to connect an average of three times per week. This is where it starts to get a little more complicated on how to make it do what it needs to do.
Here are two tricks to make it work:

1.) Radio: Buy 20 to 25 ads per week, daytime, 6 am to 7 pm. Resist the urge to buy broad rotators, even though it brings down the price. We’ll take them for free, or a dollar a holler, but we don’t want the basis of our media plans to be rooted in these broad rotators.

2.) TV: Shrink the universe to a manageable daypart—maybe 5 am to 10 am Monday to Friday. Be prepared to pay a little more to shrink the window and run 2 to 3 spots per day in a tighter window. I’m OK with buying some supplemental broader dayparts on TV, but only if you shored up a tight window first where viewers come back over and over to the same shows. I love news programming, but that’s a little pricier during an election year.

Also remember, your media sales reps are really good at the Jedi mind tricks of convincing you to buy in the ways that their sales managers want you to. If only they spent those millions on sales training, teaching media-sales representatives how to make ads work. But we’ll save that for another blog.
And until next time, onward and upward!

How to Hire a Rockstar Salesperson

Special Report: Put $20k a Year in Your Pockets

The 44-Point Checklist Every Successful Business Owner Must Have

How SGI Stands Out Among Competitors

7 Steps For Turning Your CCR Into a Club-Membership Champion

4 Changes To Your Company That Will Increase Profits